Heaven-on-High is an ever-changing dungeon whose architecture is never quite the same each time players enter the tower. All players will begin at level 61, and only by fighting the enemies within will they be able to gain the strength and experience needed to explore its heights.

Guide for the base of deep dungeon: Play guide (Lodestone)

To help you complete the HoH increase your aetherpool to the maximum and use the following consumables :


Traps will spawn randomly in any floor except the starting room. To minimize the chance of stepping on a trap, hug the walls and trace paths that your teammates take.

When opening a chest, it can turn into Mimic. These monsters automatically attack with high damage, and can apply a nasty 10 minute debuff Accursed Pox on one random player on their aggro list. This debuff is only curable with the Pomander of Purity, and prevents HP from regenerating (even out of combat) while reducing damage dealt by roughly 10%.

Avoid opening chests unnecessarily when you don't need them. Mimics appear from the following specific chests :

Their casting of Accursed Pox can be interrupted using spells that apply silence. 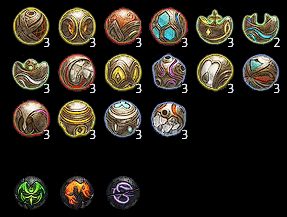 Accumulate as much Pomander as possible at the start of your ascent, you need to be at the maximum Pomander in each category when you start floors 71+.

Use Pomander mainly when you have too much of it and can't pick up the one you find.

Many mobs have a targeted skill that is often a cleave - “double autoattacks”. Each monster will have a danger level assigned party or solo as well as the type of aggro.

* : Information on the spells used by the available monster, click on the row to display them.

Starting on this set, mimics can no longer be stunned.

Avoid the Onryo as well as the Shitaibana, as they have very potent DOTs. You do not need any buffs for the boss fight, as the boss’s damage output is not that high.

The early floors are very rough due to the large amount of Onryos and Wakakusa. Make sure you have plenty of room to kite. Pop a strength or steel to make life easy if you have to. From floor 64 and beyond, there will be a lot of easier mobs to pick off, so it shouldn’t be as bad. Ideally, you should clear floor 70 with a perfect set of items.

The mobs here start to really hurt. Kite well, keep sustain potions up all the time, and be very way of patrols. Look for easy mobs to pick off. Mimics can now crit for 26K, but they’re still possible without poms if you have room to kite.

Be wary of mobs that have large conal attacks (Hyoga, Mammoth, Yeti). Because of these, you cannot kite too far.

On the later floors, there will be a couple mobs that you need to prepare to LoS for (Yak, Yuki). For the Griffin, make sure you can hide.

Do not hesitate to use a petrification to bypass an ugly floor (no abilities, gloom, etc). Make sure you check as many gold chests as you can before you do so, to get rid of possible mimics.

Be very mindful of the Garula patrols on early floors, which have huge AoE that one-shot. Make sure you have room to fight them (if you’re in a hallway in between two dangerous rooms, you may be forced into a mob or trap, which will spell death within seconds.

Alone, everything here hits insanely hard. Avoid anything with double-autoattacks unless you’re a tank or have steel. Take advantage of telegraphs to DPS.

When pulling mobs with a charge attack (Garula, Matanga, Rakshasa), you can line-of-sight the charge, such that the mob won’t be in position to auto attack you directly after (the charge will still do damage). This is very important, because if the charge crits, it can do 90% of your HP, and you’re in no shape to take an auto after that.

If you have kept Safety/Sights well, use them in separate ways one per floor, this will make 6 floors where you can feel a little quieter (use them as late as possible to have absolutely some on the last floors for example 94-99). However, adapt to the situation, if a floor, you feel it is better to use a petrification, then use a Safety/Sights with it.

Save as much Serenity as possible for the later floors when you need to use a Magicite or Petrification, it would be annoying to have Item Penalty preventing you from clearing a desired floor.

If you have affluence, pop it as soon as possible.

Be very careful of patrols and pick off mobs in areas where you know you will have a place to hide from patrols.

Steel req: For DPS (in general). Tanks can get away with mostly anything.

91-93 : White mage Nuppeppos are the easiest target to pick off. However, be careful of patrols coming around. There are walls on the side of rooms that are safe from patrols.

94-96 : Kubinashi, avoid when possible solo, and pick off as soon as possible in a party. Kyozo are the easy target on this set, as well as White Mages Nuppeppo on floor 94.

97-99 : Kyozo and Shabti are the easiest. But if you did well, you have Magicites or Petrifications ready.

99 : is guaranteed to have gloom + two other effects. Be prepared with a serenity.

Congratulations if you made it to the end!